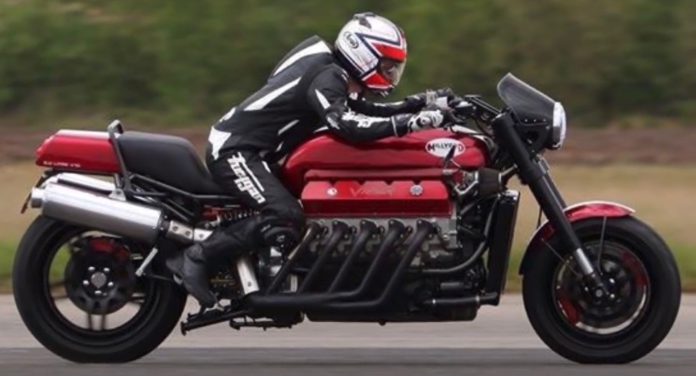 The Viper V-10 Dodge Tomahawk motorcycle concept made quite an impression at its 2003 Detroit auto show reveal, but not surprisingly it never went into production. However, one motorcycle mechanic loved the concept so much he built his own Viper V-10-powered bike.

Based in the U.K., Allen Millyard built this insane machine in a shed in 2009, and still uses it regularly. In a recent video, Millyard does some routine maintenance on the bike in preparation for its MOT, the annual inspection required for all vehicles on U.K. public roads.

The hand-built motorcycle with the massive car engine passes its inspection, proving that it isn’t just a show piece. The odometer shows 9,150 miles, in fact.

The 8.0-liter V-10 originated in a Dodge Viper GTS, and is estimated to make about 500 hp. The engine also weighs 750 pounds, accounting for most of the weight of the 1,389-pound motorcycle.

The engine’s size also made a standard motorcycle frame unworkable, so Millyard made two subframes that bolt to the front and rear of the engine. That design also leaves no room for a conventional transmission, but the V-10 has so much torque there’s no need for multiple gears, Millyard claims.

Millyard can also swap the rear-wheel sprocket for different top speeds, ranging from 160 mph to a claimed 270 mph. The bike broke 200 mph at the Bruntingthorpe proving ground in the hands of motorcycle journalist Bruce Dunn.

Millyard has several videos on his YouTube channel documenting the build of this motorcycle. Check them out for more details on this Viper-powered machine.

This article was originally published by Motor Authority, an editorial partner of ClassicCars.com.