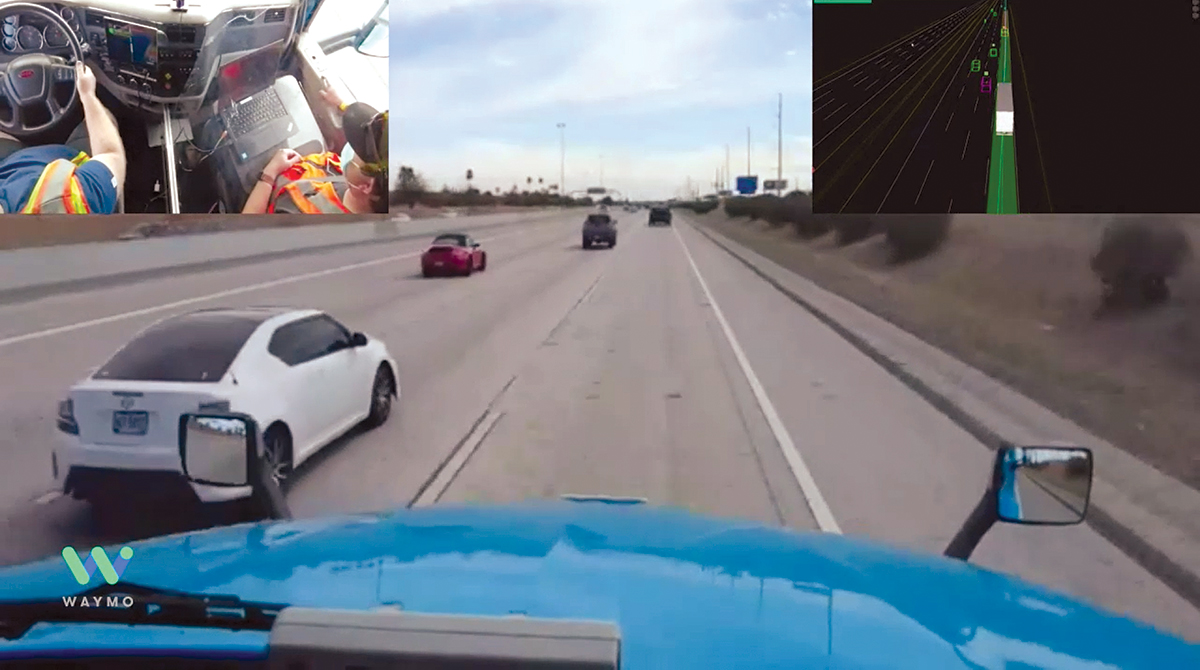 Autonomous vehicle developer Waymo offered a look inside the day-to-day testing of its self-driving trucks on public roads through a virtual ride-along event for members of the press.

During the March 24 live demonstration, a Class 8 tractor outfitted with Waymo’s automated driving system drove autonomously on highways near the company’s operations center outside of Phoenix.

With a safety driver sitting behind the wheel, the truck autonomously performed lane changes and merges while negotiating moderate traffic, including passenger cars, a motorcycle and other large commercial trucks, on Interstate 10 and Arizona Route 202.

The Waymo Driver system uses an array of onboard sensors to monitor the truck’s surroundings as it operates autonomously. (Waymo)

Meanwhile, an autonomous vehicle engineer in the passenger seat used a laptop to monitor what the robotic Waymo Driver system was “seeing and thinking” as the truck traveled down the road.

“This means the Waymo Driver is continuously improving with every mile that we drive, whether it’s autonomously or manually, including the ones that we’re seeing today,” said Pablo Abad, product manager for trucking at Waymo.

At one point, the self-driving system responded to a cut-in by automatically extending the following distance without harsh braking.

“People tend to cut in front of trucks much more closely than is often comfortable, and it’s a situation that the Waymo Driver needs to handle safely and smoothly,” said Brad Neuman, who leads the motion planning software engineering team for the company’s self-driving truck operations.

Waymo’s trucking program, named Waymo Via, is actively testing and developing technology designed to enable SAE Level 4 automated driving, meaning the truck would be able to drive itself with no human input or backup under certain conditions.

For now, though, Waymo had not yet automated all elements of the truck’s demo route. During the virtual ride-along, the safety driver manually drove the truck from Waymo’s operations center to I-10, and also took the wheel to conduct left-hand turns at intersections after exiting the freeway.

Waymo is not currently driving autonomously on surface streets with its trucks, but moving forward, the company’s trucking division intends to utilize the years of development work it has already done with passenger cars in those types of driving environments.

Waymo, which got its start in 2009 as the Google Self-Driving Car Project, is a subsidiary of Google parent company Alphabet Inc. The company began its self-driving truck program in 2017.

In addition to the ride-along, Waymo also provided a peek at its fifth generation Waymo Driver deployed on one of its Class 8 trucks.

Neuman said this latest version of the Waymo Driver features higher-resolution lidar to create 3D images of the vehicle’s surroundings, as well as 360-degree camera sensors that can detect objects more than 500 meters away. It also has improved computing capabilities and greater ability to handle hot and cold weather conditions, he said.

“All of these improvements in range and reliability also come with a lower cost and are better set to scale up for production,” Neuman added.

Waymo debuted the fifth-generation system last year on electric Jaguar I-Pace passenger cars and recently adapted it to its trucking platform as well.

The truck used in the virtual ride-along, however, was equipped with the fourth-generation version of the Waymo Driver, which houses GPS, lidar and camera sensors in the same black dome on top of the cab as the one used on its Pacificas.

The demo truck was a Peterbilt model, but Waymo has partnered with Daimler Trucks to co-develop a custom Freightliner Cascadia outfitted with the Waymo Driver and all the sensors and redundant components necessary for fully autonomous driving.