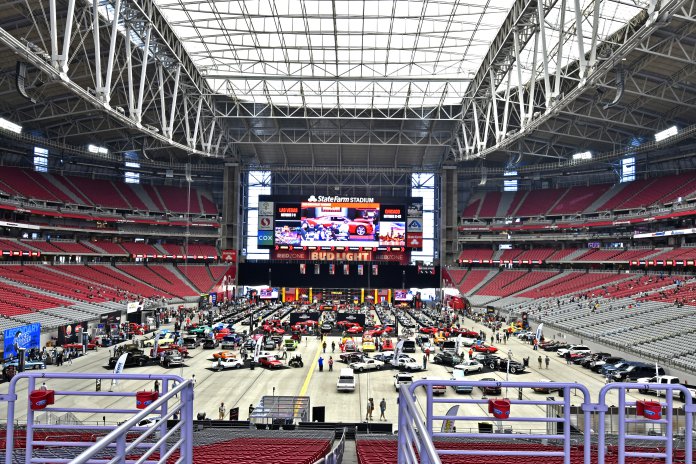 Mecum Auctions scored a touchdown at the NFL football stadium where it held its third-annual Arizona auction, reached $42.3 million in overall sales and an 86 percent sell-through rate, with 712 of 829 vehicles sold.

While last year’s collector car sale at State Farm Stadium in Glendale, a Phoenix suburb, was shut down along with everything else as the coronavirus pandemic took over, the recent Mecum auction held March 18-20 resulted in a 14 percent increase over the inaugural event in 2019.

“The success of this auction in only its third year is unprecedented,” Mecum chief operating officer Sam Murtaugh said in a news release. “By exceeding $42 million in sales in only three days, the Glendale, Arizona, event has officially established itself as the third largest auction on the Mecum calendar.”

Mecum’s highest selling vehicle was an award-winning 1967 Chevrolet Corvette L88 Coupe with its original 427/430-horsepower engine and a recipient of the Duntov Mark of Excellence and other notable Corvette honors, which sold for $2.695 million, including auction fees.

The top-10 highest-selling vehicles at Mecum’s Arizona auction were:

(All results include auction fees)

Mecum’s next sale takes place in Houston on April 8-10 at NRG Center, followed by the Vintage & Antique Motorcycle Auction on April 28-May 1 in Las Vegas, then Dana Mecum’s 34th Original Spring Classic, the company’s flagship event, slated for May 14-22 in Indianapolis.