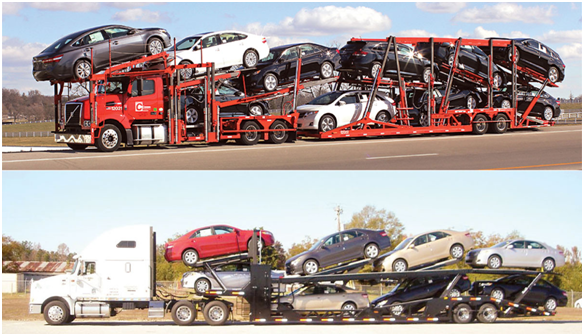 The Federal Highway Administration is considering revising its definition of automobile transporters to allow more flexibility in the type of trailers used to haul vehicles.

The agency is seeking comments until Oct. 16.

At issue is the distinction between two types of equipment: a tractor-trailer rig made to carry a vehicle over the top of the tractor and a conventional tractor that is simply pulling a car-hauling trailer. One is considered an automobile transporter while the other is not and, as a result, there is confusion over how to enforce state laws limiting the size of trailers on interstate highways.

Automobile transporters are subject to length restrictions that allow a certain amount of “overhang” on trailers, but in some states operators of tractors pulling car-haul trailers have received fines and other penalties because the overhang on the trailer can exceed limits that are in place for standard 53-foot cargo trailers.

The enforcement of trailer length regulations has been especially problematic in Missouri and parts of the Pacific Northwest, but can vary widely among local jurisdictions depending on changes in personnel, said Bob Farrell, executive director of the Automobile Carriers Conference of American Trucking Associations in Arlington, Va.

Questions about the definition of automobile transporters have been raised for many years, but the issue may have gained some currency because of the impact of recent hurricanes in Texas and Florida, which may have damaged or destroyed an estimated 250,000 vehicles, according to Copart Inc., a vehicle auction site that specializes in salvaged vehicles.

ATA’s Farrell said as many as 500,000 replacement vehicles may be moved into the affected regions, creating a surge in demand for trucks to haul vehicles.

While automobile transporters, which can carry up to 12 vehicles, are typically used to haul vehicles from manufacturing plants and rail terminals to dealerships, tractor-trailer combination units, which are limited to eight vehicles, are generally used to move used cars for dealers, auction sites and salvage yards.

Changing the definition of automobile transporters to include tractor-trailer combination units would make it easier for shippers to access vehicle hauling capacity, while also eliminating disparities in how states enforce length restrictions on trailers, according to Farrell.

Joining Farrell in calling for clarification of the issue is Todd Spencer, executive vice president of the Owner-Operator Independent Drivers Association, an organization based in Grain Valley, Mo., that represents 158,000 drivers who own and operate more than 240,000 heavy-duty trucks.

“If the rear and front overhang is not permitted, it effectively requires the removal of the rear and front vehicles on the top and bottom of the trailer. In other words, FHWA’s current interpretation equates to a 25% to 50% reduction in efficiency and revenue,” he said.

Farrell said the broadening of FHWA’s definition of automobile transporters will not have a major impact on the carhaul industry, noting that overall length limits on carhaul equipment of 65 feet would still apply.